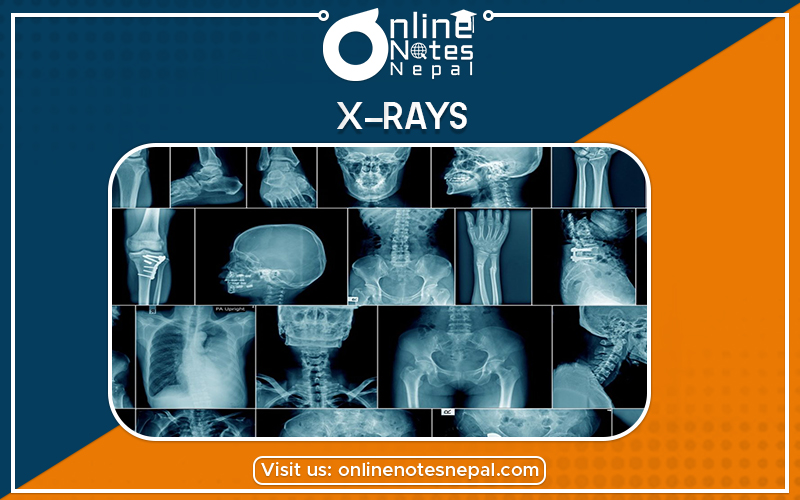 X-rays make up X-radiation, a form of high-energy electromagnetic radiation. Most X-rays have a wavelength ranging from 0.03 to 3 nanometres, corresponding to frequencies in the range 30 petahertz to 30 exahertz (3×1016 Hz to 3×1019 Hz) and energies in the range 100 eV to 200 keV. X-ray wavelengths are shorter than those of UV rays and typically longer than those of gamma rays. In many languages, X-radiation is referred to as Röntgen radiation, after the German scientist Wilhelm Röntgen, who discovered it on November 8, 1895. He named it X-radiation to signify an unknown type of radiation.Spellings of X-ray(s) in English include the variants x-ray(s), x-ray(s), and X-ray(s).

X-rays are a type of radiation called electromagnetic waves. X-ray imaging creates pictures of the inside of your body. The images show the parts of your body in different shades of black and white. This is because different tissues absorb different amounts of radiation. Calcium in bones absorbs x-rays the most, so bones look white. Fat and other soft tissues absorb less and look grey. Air absorbs the least, so lungs look black.

The most familiar use of x-rays is checking for fractures (broken bones), but x-rays are also used in other ways. For example, chest x-rays can spot pneumonia. Mammograms use x-rays to look for breast cancer.

An X-ray is a common imaging test that’s been used for decades. It can help your doctor view the inside of your body without having to make an incision. This can help them diagnose, monitor, and treat many medical conditions.

Different types of X-rays are used for different purposes. For example, your doctor may order a mammogram to examine your breasts. Or they may order an X-ray with a barium enema to get a closer look at your gastrointestinal tract.

There are some risks involved in getting an X-ray. But for most people, the potential benefits outweigh the risks. Talk to your doctor to learn more about what is right for you.

The production function is the name given to the physical relationship between a firm’s physical inputs and outputs depending on a given state of technical knowledge.

Like demand, it refers to a period. Accordingly, it refers to a flow of inputs resulting in a flow of outputs over some time, leaving prices aside. It shows the maximum amount of output that can be produced from a given set of inputs in the existing state of technology.

The output will change when the quantity of any input is changed.

In real life, a manufacturer wants to know how much of the various factors or inputs, viz., land (i.e. natural resources), labor, and capital will be required to produce a unit or a given quantity of a commodity during a given period.

He must know this so that he may be able not only to assess his requirements of productive services but also roughly estimate the probable cost. It will thus indicate the quantities of the productive resources and their possible combinations used for production.

X-ray diffraction has acted as the cornerstone of twentieth-century science. Its development has catalyzed the developments of all of the rest of solid-state science and much of our understanding of chemical bonding. X-ray powder diffraction (XRPD) plays a critical role in materials research and development because many materials and minerals are not readily available in single-crystal form. Some 10000–20000 powder diffractometers are in use worldwide, and of the order of 160000 powder patterns are available in the Powder Diffraction File (PDF) electronic database. Although the technique is termed ‘‘powder diffraction,’’ any polycrystalline specimen may be studied using the technique, including monolithic solids, thin films, and powders.