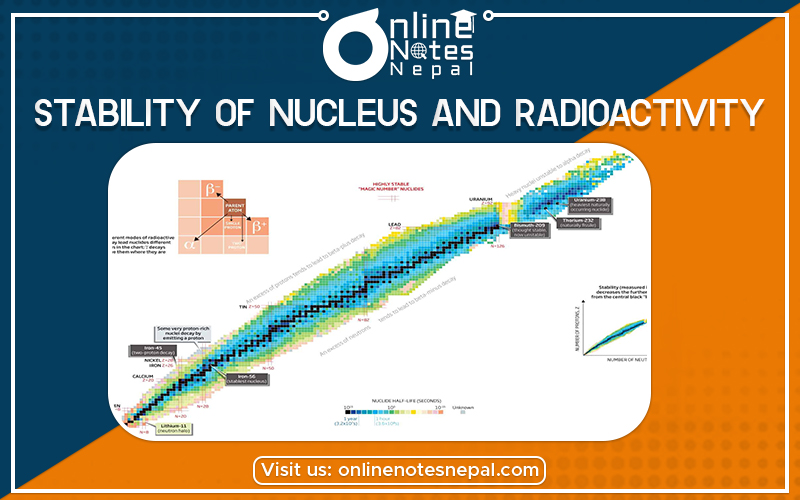 The nucleus consists of proton and neutron. These protons and neutron remain under the action of two competitive forces; an attractive force also called nuclear force and electrostatic repulsive force. The nuclear force exists between the nucleolus. (Neutron and proton). The electrostatic force of repulsion exists between the protons. Hence, for a nucleus to remain stable required a certain number of proton and neutron. However, such a condition doesn’t hold in every element especially with heavy elements whose atomic number is greater than 82. The elements which are unstable emit radiation spontaneously without using any external agent. This activity of a nucleus is known as radioactivity and the elements which show this behaviour are known as radioactive elements. The behaviours of the radioactivity don’t depend upon temperature, pressure and chemical reactions. The radioactive elements emit radiation in different forms which are known as alpha particle emission, beta particle emission, and gamma rays emission.
The figure above shows the condition for the stability of the nucleus and the dotted line indicates the condition of instability.

What makes a nucleus stable?
The major underlying reason is: “Nature seeks the lowest energy state”. In the lowest energy state, things are most stable…less likely to change. One way to view this is that energy makes things happen. If an atom is at its lowest energy state, it has no energy to spare to make a change occur. Think of yourself when you are tired and ready for sleep. In this case, you will most likely just stay put and not do anything. The following information that talks about stability are all based on the nucleus tending towards the lowest energy state. Stable atoms have low energy states. Unstable atoms will try and become stable by getting to a lower energy state. They will typically do this by emitting some form of radioactivity and change in the process. The three main forms of radioactive changes are named after the first three Greek letters: alpha, beta, and gamma…more about these later.