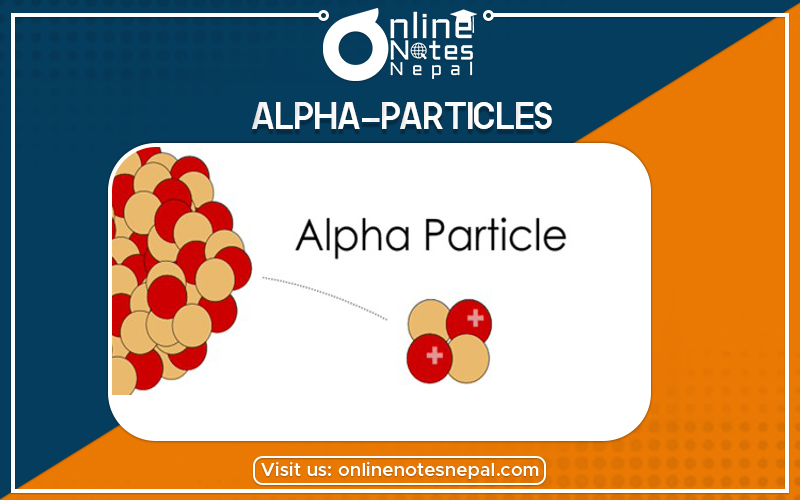 Alpha particles, also called alpha rays or alpha radiation, consist of two protons and two neutrons bound together into a particle identical to a helium-4 nucleus. They are generally produced in the process of alpha decay, but may also be produced in other ways. Alpha particles are named after the first letter in the Greek alphabet, α. The symbol for the alpha particle is α or α2+. Because they are identical to helium nuclei, they are also sometimes written as He2+or 42He2+indicating a helium ion with a +2 charge (missing its two electrons). If the ion gains electrons from its environment, the alpha particle becomes a normal (electrically neutral) helium atom 42He.

Alph- particles, like helium nuclei, have a net spin of zero. Due to the mechanism of their production in standard alpha radioactive decay, alpha particles generally have a kinetic energy of about 5 MeV and velocity in the vicinity of 5% the speed of light. (See discussion below for the limits of these figures in alpha decay.) They are a highly ionizing form of particle radiation, and (when resulting from radioactive alpha decay) have low penetration depth. They can be stopped by a few centimetres of air, or by the skin.

However, so-called long-range alpha particles from ternary fission are three times as energetic and penetrate three times as far. As noted, the helium nuclei that form 10–12% of cosmic rays are also usually of much higher energy than those produced by nuclear decay processes and are thus capable of being highly penetrating and able to traverse the human body and also many meters of dense solid shielding, depending on their energy. To a lesser extent, this is also true of very high-energy helium nuclei produced by particle accelerators.

A beta particle also called beta ray or beta radiation (symbol β), is a high-energy, high-speed electron or positron emitted by the radioactive decay of an atomic nucleus during the process of beta decay. There are two forms of beta decay, β− decay and β+ decay, which produce electrons and positrons respectively.
Beta particles with an energy of 0.5 MeV have a range of about one meter in the air; the distance is dependent on the particle energy.
Beta particles are a type of ionizing radiation and for radiation protection purposes are regarded as being more ionizing than gamma rays, but less ionizing than alpha particles. The higher the ionizing effect, the greater the damage to living tissue.