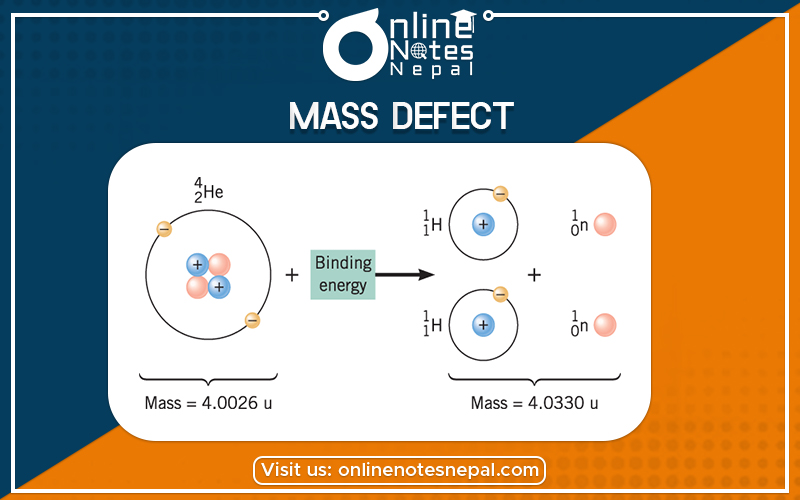 Proton and neutron are the constituent particles of the nucleus. But the mass of a nucleus is found to differ from the sum of masses of proton and neutron. This difference in mass is known as mass defect.

The mass defect is given by the formula

Here, (mn+mp) -represent the combined mass of proton and neutron, and mo- denotes the original mass of an atom
The nuclear binding energy accounts for the noticeable difference between the actual mass of the atom's nucleus and the expected mass. This is the main energy that helps to hold the nucleus together.
Einstein’s law of interconversion of mass to energy expressed as,
E =mc2
Here, E is the total energy, m is the mass of the particle, and c is the velocity of light.
Thus, we have the binding energy of the nucleus given by the equation

B.E represents binding energy and we have the letter A which represents the atomic mass number.

In physics, binding energy (also called separation energy) is the minimum energy required to disassemble a system of particles into separate parts. This energy is equal to the mass defect minus the amount of energy, or mass, that is released when a bound system (which typically has lower potential energy than the sum of its constituent parts) is created and is what keeps the system together.

All of the energy we produce comes from basic chemical and physical processes. That’s mostly been accomplished throughout history by burning carbon-based material like wood, coal, and gas—or by harnessing power from the sun, wind, and water. Fission and fusion are two physical processes that produce massive amounts of energy from atoms. They yield millions of times more energy than other sources through nuclear reactions.