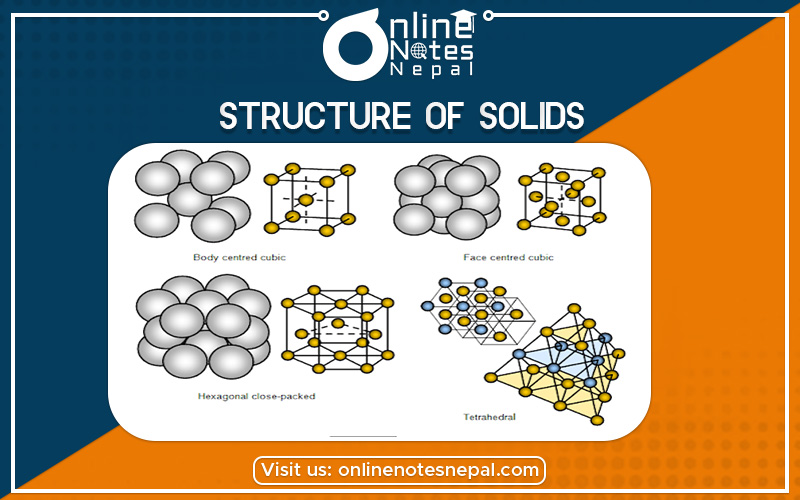 Crystalline solids have regular ordered arrays of components held together by uniform intermolecular forces, whereas the components of amorphous solids are not arranged in regular arrays. With few exceptions, the particles that compose a solid material, whether ionic, molecular, covalent, or metallic, are held in place by strong attractive forces between them. When we discuss solids, therefore, we consider the positions of the atoms, molecules, or ions, which are essentially fixed in space, rather than their emotions (which are more important in liquids and gases). The constituents of a solid can be arranged in two general ways: they can form a regular repeating three-dimensional structure called a crystal lattice, thus producing a crystalline solid, or they can aggregate with no particular order, in which case they form an amorphous solid (from the Greek ámorphos, meaning “shapeless”). (left) Crystalline faces. The faces of crystals can intersect at right angles, as in galena (PbS) and pyrite (FeS2), or at other angles, as in quartz. (Right) Cleavage surfaces of an amorphous solid. Obsidian, a volcanic glass with the same chemical composition as granite (typically KAlSi3O8), tends to have curved, irregular surfaces when cleaved.

Crystalline solids, or crystals, have distinctive internal structures that in turn lead to distinctive flat surfaces or faces. The faces intersect at angles that are characteristic of the substance. When exposed to x-rays, each structure also produces a distinctive pattern that can be used to identify the material. The characteristic angles do not depend on the size of the crystal; they reflect the regular repeating arrangement of the component atoms, molecules, or ions in space. When an ionic crystal is cleaved (Figure 11.7.1, for example, repulsive interactions cause it to break along fixed planes to produce new faces that intersect at the same angles as those in the original crystal. In a covalent solid such as a cut diamond, the angles at which the faces meet is also not arbitrary but are determined by the arrangement of the carbon atoms in the crystal.

Figure 11.7.1: Cleaving a Crystal of an Ionic Compound along a Plane of Ions. The deformation of the ionic crystal causes one plane of atoms to slide along another. The resulting repulsive interactions between ions with like charges cause the layers to separate.

Crystals tend to have relatively sharp, well-defined melting points because all the component atoms, molecules, or ions are the same distance from the same number and type of neighbors; that is, the regularity of the crystalline lattice creates local environments that are the same. Thus the intermolecular forces holding the solid together are uniform, and the same amount of thermal energy is needed to break every interaction simultaneously.

Amorphous solids have two characteristic properties. When cleaved or broken, they produce fragments with irregular, often curved surfaces; and they have poorly defined patterns when exposed to x-rays because their components are not arranged in a regular array. An amorphous, translucent solid is called a glass. Almost any substance can solidify in the amorphous form if the liquid phase is cooled rapidly enough. Some solids, however, are intrinsically amorphous, because either their components cannot fit together well enough to form a stable crystalline lattice or they contain impurities that disrupt the lattice. For example, although the chemical composition and the basic structural units of a quartz crystal and quartz glass are the same—both are SiO2 and both consist of linked SiO4 tetrahedra—the arrangements of the atoms in space are not. Crystalline quartz contains a highly ordered arrangement of silicon and oxygen atoms, but in quartz glass, the atoms are arranged almost randomly. When molten SiO2 is cooled rapidly (4 K/min), it forms quartz glass, whereas the large, perfect quartz crystals sold in mineral shops have had cooling times of thousands of years. In contrast, aluminum crystallizes much more rapidly. Amorphous aluminum forms only when the liquid is cooled at the extraordinary rate of 4 × 1013 K/s, which prevents the atoms from arranging themselves into a regular array.