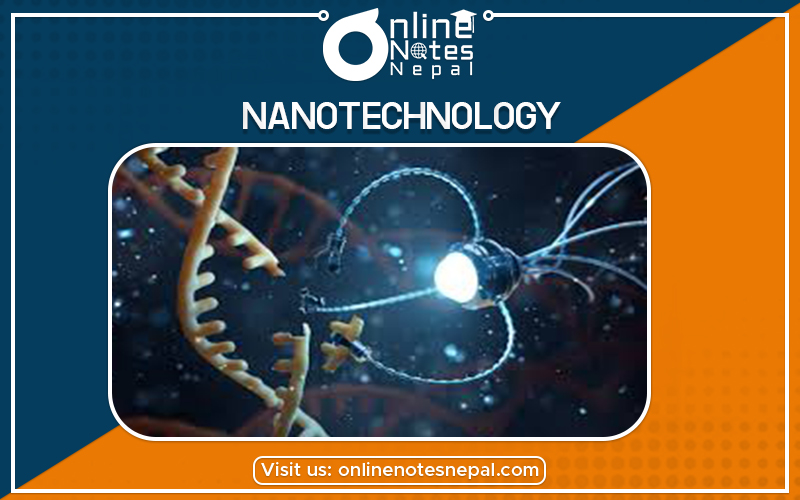 Nanotechnology refers broadly to a field of applied science and technology whose unifying theme is the control of matter on the molecular level in scales smaller than 1 micrometre, normally 1 to 100 nanometers, and the fabrication of devices within that size range.

It is a highly multidisciplinary field, drawing from fields such as applied physics, materials science, colloidal science, device physics, supramolecular chemistry, and even mechanical and electrical engineering.

Much speculation exists as to what new science and technology may result from these lines of research.

In the “bottom-up” approach, materials and devices are built from molecular components that assemble themselves chemically by principles of molecular recognition.

In the “top-down” approach, nano-objects are constructed from larger entities without atomic-level control.

The impetus for nanotechnology comes from a renewed interest in colloidal science, coupled with a new generation of analytical tools such as the atomic force microscope (AFM), and the scanning tunnelling microscope (STM).

Combined with refined processes such as electron beam lithography and molecular beam epitaxy, these instruments allow the deliberate manipulation of nanostructures and led to the observation of novel phenomena.

Examples of nanotechnology in modern use are the manufacture of polymers based on molecular structure, and the design of computer chip layouts based on surface science.

Despite the great promise of numerous nanotechnologies such as quantum dots and nanotubes, real commercial applications have mainly used the advantages of colloidal nanoparticles in bulk forms, such as suntan lotion, cosmetics, protective coatings, and stain-resistant clothing.

Modern synthetic chemistry has reached the point where it is possible to prepare small molecules to almost any structure.

These methods are used today to produce a wide variety of useful chemicals such as pharmaceuticals or commercial polymers.

This ability raises the question of extending this kind of control to the next-larger level, seeking methods to assemble these single molecules into supramolecular assemblies consisting of many molecules arranged in a well-defined manner.

These approaches utilize the concepts of molecular self-assembly and/or supramolecular chemistry to automatically arrange themselves into some useful conformation through a bottom-up approach.

The concept of molecular recognition is especially important: molecules can be designed so that a specific conformation or arrangement is favoured due to non-covalent intermolecular forces.

The Watson-Crick base-pairing rules are a direct result of this, as is the specificity of an enzyme being targeted to a single substrate, or the specific folding of the protein itself.

Thus, two or more components can be designed to be complementary and mutually attractive so that they make a more complex and useful whole.