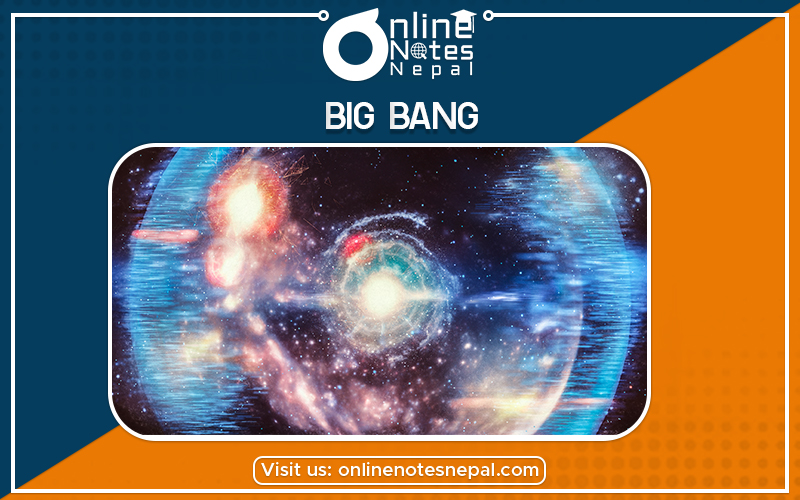 The Big Bang Theory is a cosmological model of the observable universe from the earliest known periods through its subsequent large-scale evolution. The model describes how the universe expanded from an initial state of very high density and high temperature and offers a comprehensive explanation for a broad range of observed phenomena, including the abundance of light elements, the cosmic microwave background (CMB) radiation, large-scale structure, and Hubble’s law – the farther away galaxies are, the faster they are moving away from Earth. If the observed conditions are extrapolated backwards in time using the known laws of physics, the prediction is that just before a period of very high density there was a singularity. Current knowledge is insufficient to determine if the singularity was primordial.

Georges Lemaître first noted in 1927 that an expanding universe could be traced back in time to an originating single point, calling his theory that of the “primaeval atom”. For much of the rest of the 20th-century scientific community was divided between supporters of the Big Bang and the rival Steady-state model, but a wide range of empirical evidence has strongly favoured the Big Bang, which is now universally accepted. Edwin Hubble concluded from the analysis of galactic redshifts in 1929 that galaxies are drifting apart; this is important observational evidence for an expanding universe. In 1964, the CMB was discovered, which was crucial evidence in favour of the hot Big Bang model, since that theory predicted the existence of background radiation throughout the universe.

The known laws of physics can be used to calculate the characteristics of the universe in detail back in time to an initial state of extreme density and temperature. Detailed measurements of the expansion rate of the universe place the Big Bang at around 13.8 billion years ago, which is thus considered the age of the universe. After its initial expansion, the universe cooled sufficiently to allow the formation of subatomic particles, and later atoms. Giant clouds of these primordial elements – mostly hydrogen, with some helium and lithium – later coalesced through gravity, forming early stars and galaxies, the descendants of which are visible today. Besides these primordial building materials, Astronomers observe the gravitational effects of an unknown dark matter surrounding galaxies. Most of the gravitational potential in the universe seems to be in this form, and the Big Bang theory and various observations indicate that it is not conventional baryonic matter that forms atoms. Measurements of the redshifts of supernovae indicate that the expansion of the universe is accelerating, an observation attributed to dark energy’s existence.